Should Real Estate Appraisals Be Treated Like Food Labeling?

Does the public and users of appraisals need to know what's in that value opinion?


Up to the late 1960s, there was little information on food labels to identify the nutrient and chemical content of the food. Prior to that time meals were generally prepared at home from basic ingredients and there was little demand for nutritional information (Kessler, 1989).

However, as increasing numbers of processed foods came into the marketplace, consumers requested information that would help them understand the products they purchased (WHC, 1970).

People started to become "woke" or conscious of the radical discrimination by the food industry that continued to hide, in the name of profit, what really was in the food they were consuming.

This form of suppression and injustice by the food industry had little regard for the public's interest and trust concerning their health and well being.

In response to this dilemma, a recommendation from the 1969 White House Conference on Food, Nutrition, and Health was that the FDA consider developing a system for identifying the nutritional qualities of food.

Not until the passage of the Nutrition Labeling and Education Act (NLEA) of 1990 did full disclosure of our food product finally became mandatory. Since then, look at how our food quality has improved with healthier informed choices as to what we put in our bodies.

Not everybody reads or even cares about what's in their food but the ones that do typically have a better chance of leading a healthier more productive long life. 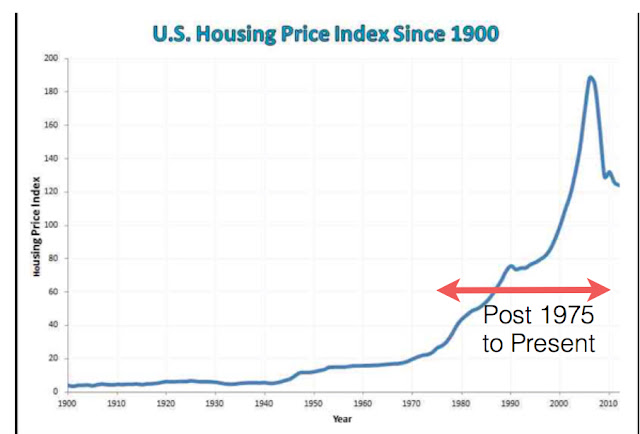 Like when meals were generally prepared at home from basic ingredients, so to was there little demand from buyers or lenders for the appraiser to indicate all the collective market forecasts or "ingredients" that made up the present value of the property's current "most probable" market value. This included the collective market's forecasted ending sale price, called reversion, during the current market cycle.

Nor was there any demand from buyers or lenders for the appraiser to quantify if there was a likelihood of the appraiser's value opinion collapsing during the current market cycle.

During these former times, buyers/sellers and lenders simply relied on a real estate appraiser to accurately value the property based on what the "most probable" value everyone else was paying for similar properties, no more and no less. They did not want the appraiser's "gut feeling" about the property's value but instead wanted quantitative evidence of what everyone else was paying for similar properties based on comparable sales.

The buyers knew if they reasonably took care and managed the property they could expect to sell the property hopefully for a little more then what they purchased it for. Where they made money was from the amortization of the loan.

In the meantime, they would enjoy the benefits of homeownership as opposed to renting and investors would reap the benefits of a competitive return on their investment from net rental proceeds.

As you can see everything changed at about 1970 and beyond. Various reasons have been hypothesized such as this was about the time Nixon took our money off the gold standard. Others claimed globalization occurred about that time when we opened our markets to the rest of the world, or looser lending standards and higher LTV (Loan To Value), longer amortization periods all had led to this phenomenon.

Regardless of the reason why this trend happened has nevertheless led to enormous bubbles and busts of real estate values as we have witnessed since then. These real estate valuation collapses have occurred in the commercial (the Saving & Loan Crisis of the late 1980s) and the most recent "Great Recession" of 2007.

These irrational "ingredients" were composed of the collective market forecasts that deviated from otherwise rational forecasts.  Rational forecasts are in alignment with a specific market's demographic-economic profile of individuals that use a specific property.

The threshold in quantifying irrational exuberance of any property is when a property's current "most probable" market value is greater then the future quantified fundamental "value" or reversion. The greater the current "most probable" market value deviates from the future fundamental reversion dictates the amount of current value loss the property owner will most likely experience during the current market cycle.

The opposite is true in quantifying if there's irrational fear in the collective market forecasts that make up a property's current "most probable" market value. If the property's current market value is lower then the future fundamental reversion, the property owner can expect a better then expected ending sale price and consequently a better then expected all-cash property yield.
Prior to the late 1960s, consumers were simply making their food buying decisions based on price. However, they didn't know if the product at the lowest and best price contained ingredients that were hazardous to their health

Consumers wised up in the late 1960s and began demanding food manufacturers disclose the ingredients of food products. The same is true now in the real estate industry. Prior to the 1970's real estate buyers, sellers, lenders made their decisions based on the best and "most probable" property value when compared to competing property sale prices.

The United States alone is $23 Trillion in debt after two devastating real estate collapses since the 1980s. Millions of property owners have since suffered extreme financial hardships due to losses from otherwise well supported "most probable" market values they paid for properties.
It's time appraisers and lenders disclose the "ingredients" or the market forecasts of every "most probable" value opinion.

In addition, every "most probable" value opinion must have a value sustainability analysis indicating if there's a reasonable probability the market forecasts, including the reversion forecast, is obtainable during the current market cycle.

This full disclosure of real estate appraisals will actually stabilize economic activity and lessen the intensity and bubble formation of the normal ebbs and flows of future market cycles.

Well supported "most probable" market value opinions can now be misleading. Now the "ingredients" of what you are buying or lending upon are available for you to see and if they are hazardous to your financial health.

Get a FREE WHITE PAPER on this important subject to learn more.

Raymond Dozier, MAI
Mr. Dozier has more than 43 years of appraisal experience and is a 40 year life member of the Appraisal Institute. He is a designated MAI member (the Appraisal Institutes highest designation) and also is a licensed real estate broker for more than 40 years. He graduated in 1975 from the University of Kentucky with a bachelors degree in business administration. Raymond is the president of Dozier Appraisal Company, founded in 1980, and he is also the founder and CEO of Valuexpose, Inc, an enterprise software company specializing in patent pending valuation tools that will help prevent devastating speculative real estate bubbles. Mr. Dozier has extensive expertise in valuation of all types of complex real property interests and of closely-held businesses. Mr. Dozier has extensively testified as an expert witness in Superior, US District and Federal Bankruptcy Court concerning valuation issues. He also served as a guest instructor at The University of Kentucky teaching corporate finance and the time value of money methodologies. Mr. Dozier resides in Southern California (Palm Springs area).